Adams, Robert: REVENGE OF THE HORSECLANS 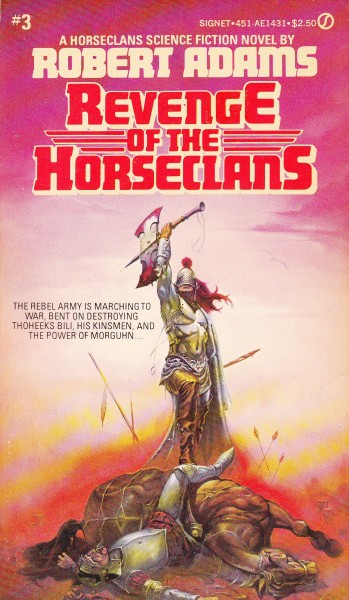 The Thoheeks of Morguhn is dying, and his eldest son Bili has been summoned home to claim his inheritance after years of soldiering in the Middle Kingdoms. Yet Bili´s reign could end before it begins. For the old Ehleen nobility and the priests of the ancient religion are planting the seeds of rebellion, swearing to wrest back from Bili and his fellow Horseclansmen the lands and wealth which once were theirs. And Bili can´t be sure that help will come in time, because the forces of the Confedertion are already hard pressed putting down rebellions in neighboring duchies. What Bili doen´t know is that both his troops and those of his enemy, Lord Myros, are only pawns in a larger game - a deadly game of bloody intrigue, with stake as big as the survival of the whole Confederation...